Karen was one of the estimated 10,000 protesters at this year’s Animal Rights March in London. Here, she reflects on its growth over the past two years and its contribution to highlighting the cruelty of killing animals to gratify human consumption

Last year I joined 5,000 vegans on the Animal Rights March across London, an emotive annual event founded by the UK animal rights organisation Surge. At the first such event in 2016, the number of people protesting against animal cruelty of all kinds had been half that, at 2,500.

As a vegan for three years, and vegetarian for more than 40, last year’s march was a powerful and uplifting experience for me. I’d gone alone, I didn’t make new friends or spend time chatting, and I was anxious as hell before the event, with no idea what to expect. But from the moment I arrived I was part of something impassioned and heart-warming that simply felt right.

What overcame my nervous, lazy side was the notion of being a voice for the voiceless, and once there I was swept along and inspired by the slogans, banners and chants; and as a result of the speeches at the end, I left determined to become part of a wider vegan community.

And so it seemed inevitable that I’d be there again this year, and all the positive changes I’d seen over the past 12 months – a rapidly growing acceptance of veganism as a way of life, articles in the mainstream media, plus tons of cash being pumped into plant-based merchandise – made me suspect it’d be a much bigger affair.

As we gathered at Millbank on Saturday (August 25) I was aware that the crowd – people of all ages – felt bigger, but it was only as the march rolled out on to the streets near Westminster that it became obvious just how many of us there were. Later that night the figures were confirmed: 10,000 people had taken part, and once again participant numbers had doubled.

I’m delighted, humbled and honoured to have been part of the protest, but added to this is the shame that I live in a society that condones horrific acts of violence against millions of our fellow Earth creatures every day.  The posters and placards around me on the rally reminded powerfully me of the enormity of this brutality – I often forget the details. as I come from and live with a family for whom eating dead animals was never really an option.

The two marches I’ve attended have been deeply emotional experiences for me – on the one hand, there is pride and a sense of belonging at being in so like-minded a crowd; on the other, crushing sadness at the reality of the wider society around me and the practices it accepts as normal when it comes to taste buds. These issues are highlighted when the march passes eating establishments that serve carcasses of dead creatures as a matter of course.

You need to experience the uplifting vibe of the marches to truly appreciate their power, but here are a few shots I took on the day in the hope of conveying something of what it feels like to be there.

Doug Maw, centre, was among those at the march; he is fighting the Bank of England over its bank notes containing tallow 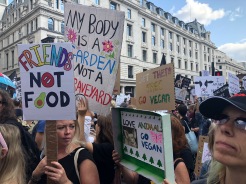 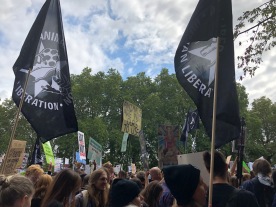 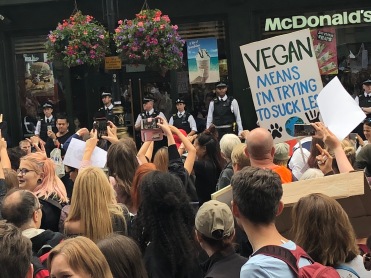