Our latest contributor is Tash, an Australian surfer who believes vegans have a moral obligation to bear witness to the cruelty of the meat industry – and speak up 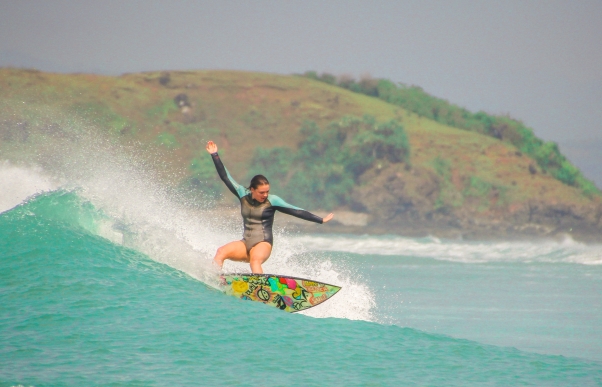 I’m from Perth, Western Australia, and have completed 25 orbits around the sun. I have been a swimming instructor and lifeguard since I finished high school in 2010. I have a bachelor degree in outdoor recreation, which I have not yet used for a career, due to the fact that I have been travelling the world since I finished studying in 2016. I have travelled to 35 countries in the past few years and stay overseas each year for about three to five months at a time. I love to travel alone and explore the world freely doing whatever I wish, whenever I wish.

I grew up in the great outdoors and a majority of my childhood consisted of numerous camping trips in the remote regions of Western Australia, swimming with dolphins, going boating to islands, surfing and many other wild adventures. I am an experienced surfer and have travelled to Indonesia on 13 occasions to surf some of the best waves in the world. I also surfed the world’s longest wave in Peru last year – it was incredible!

From a very young age, I dreamt of being a marine biologist because I was intrigued by the big blue ocean and the animals that coexisted within it. I owned endless amounts of marine science books and I would spend hours reading them and drawing marine animals. I could name just about every dolphin and whale species that existed. I was also a huge environmental advocate – I remember always telling my younger brother off for using too much water or leaving the lights on.

I became vegan on February 1 2017, and decided to make the change overnight from carnist to vegan. I had watched a documentary called Food Choices on Netflix and it immediately made me want to change my lifestyle. The documentary covered the health benefits of a plant-based diet, the health risks of animal products, animal cruelty in the meat, dairy and egg industries, and the environmental devastation that these industries cause upon the planet.

My mind was completely opened and I knew from that day onwards, I would be vegan for life. I had always been so conscious of my health, loved animals, and cared significantly about the planet. I had just never realised that animal products were so harmful to one’s health, that you can’t love animals and eat them and that animal agriculture was the primary cause of climate change as well as so many other environmental issues.

My diet consists predominantly of whole foods as I love being healthy, energetic and want my life to be the highest quality as possible. Everyday I have a banana, kale and blueberry smoothie and a big fresh quinoa and chickpea salad. I still love indulging in vegan burritos, ice cream and brownies though.

Many people think that you have to be careful about getting enough nutrients on a vegan diet, but I’ve never had to worry thanks to whole plant-based foods. After all, I am eating the only diet on this planet that is known to prevent and even reverse disease.

I have honestly never been healthier in my life; I love the quote “my body is a garden, not a graveyard”, because it is so true. If you consume animal flesh and secretions, you are not only eating rotting flesh and secretions that are not designed to be consumed by humans, but you are also consuming the suffering and pain that an animal experienced throughout its whole life, including its brutal murder.

In a non-vegan world, it is definitely difficult living in everyday life because your eyes are completely opened to the enormous amount of cruelty that our species inflicts upon millions of innocent animals each day. Seeing “meat” on someone’s plate is a dead animal and it is seriously confronting and can take an emotional toll. I am a passionate animal rights activist, so I often bear witness to animals before they are killed at the slaughterhouse, which makes everyday life even more difficult.

But in the end, it is important to stay as positive as possible and remember that the real ones who are suffering are the animals, and vegan activists are the only voice that they have. Spreading awareness is the only thing that is making the vegan movement grow. Yes, of coarse it is fantastic to become vegan and not participate in animal cruelty, but as a vegan, we have a moral obligation to stand up for these animals and make the word realise how unjust it is. As Martin Luther King Junior said, one has a moral responsibility to disobey unjust laws.

I am involved with an amazing vegan community here in Perth. We have really stepped up our game recently and many of our actions have been making it into mainstream media which is so great (even though they portray us as militant extremists), because, firstly, people are going to start talking about veganism and, secondly, a lot of people will be exposed to witnessing animal cruelty that they may have not seen before.

I have done activism with the Save Movement, Anonymous for the Voiceless, Direct Action Everywhere and a lot of others not associated with any organisation in particular. I am so grateful that I decided to become active just over a year ago now – it is so amazing to be supported by like-minded vegans and fight for the animals together. I really enjoy it and I am also so happy that my mum became vegan very soon after I did. I took my dad to watch Dominion  and he has made some big changes; he is not vegan, but hopefully one day he will be.

I definitely think that vegan is the future, and even though we are still a minority, the movement is rapidly growing. I think being active and exposing animal cruelty, particularly in the meat, dairy and egg industries is the most important thing that vegans can do to encourage carnists to go vegan.

Social media is a powerful platform to share all kinds of footage and awareness of what is happening in the animal holocaust. But what I think is even more powerful is bearing witness to animals at slaughterhouses and live-streaming it on your social media. I have started numerous conversations with friends because they have asked me about what I was doing at a slaughterhouse. 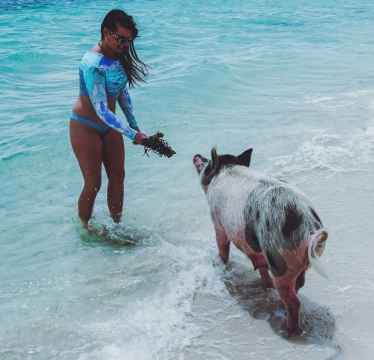 I think the documentary Dominion is extremely important for everyone to watch, yes even vegans! I watched it as a vegan, cried the whole two hours, managed to keep my eyes open the whole time, and, yes, it was an extremely rough couple of weeks afterwards. But in the end I had a huge amount of knowledge of what goes on in these industries, so my conversations became more educated and being able to tell a non-vegan what you have witnessed is so powerful.

Being vegan means the world to me. My whole life revolves around veganism and it is something that is constantly on my mind. It is hard knowing what is happening to so many beautiful animals every second of the day, but as I mentioned earlier staying positive is so important and being a good role model for veganism is as well. Vegan products are popping up everywhere because the demand for vegan food is increasing, and many non-vegan businesses are threatened and even closing down. How freaking amazing!

I think many vegans are afraid of being judged, or don’t want to be “that annoying vegan”, so they avoid conversations and standing up for the animals. From day one, I have always been so proud of being vegan and I have rarely come across any people being nasty towards my lifestyle choice, despite being incredibly vocal by exposing animal cruelty online and talking about it whenever possible.

The animals need us. Never be afraid about what people may think about you, speak up for the animals with compassion and understanding and people will listen and admire.

If you are interested in sharing your thoughts in our Everyday Vegans slot, please get in touch and we’ll let you know what to do.