The latest contributor to our series is Zack Polanski, 36, a London Assembly candidate for the Green Party whose veganism is closely aligned to his environmental activism

How long have you been vegan?
I’ve been vegan for four years and was vegetarian for ten years before that.

What led to the change from vegetarian to vegan?
I was making a documentary for a production company – which they never completed – but whilst I was preparing questions for vegan activists, I realised I already instinctively knew the answers.

Do you see yourself ever going back to being an omnivore?
No.

Are you a ‘healthy’ vegan? Often people assume we’re all fitness-obsessed, when the reality is that we come in many flav­ours and for many pe­ople life is an eter­nal hunt for vegan cake. What makes up your diet?
Not at all. Fast-paced London lifestyle fuelled by Huel, vegan fast food and the occasional cooked vegetable.

Do you consciously think about where you get your protein, etc, from?
I used to, but as you get in a groove, I think your body lets you know when it’s time for the healthy option.

For many vegans, the initial realisation of facts that make us turn to a different lifestyle is pretty life-changing and alienating. We view things differently, from the supermarket shopping experience in a meat-eating world to the people around us. How was that change in mindset… the reality of being an outsider in many situations… for you?
That’s absolutely right. Being vegan meant I spent much more time around environmentalists and people who were fighting to save the planet. I went vegan for the animals – and then realised there are so many more other crucial reasons to do it too.

Do you mix with many other vegans – does your lifestyle mean that you come into contact with people of a similar outlook regularly?
A fair few. I’d say a large part of my friendship group is vegan. Including my partner, Richie!

Do you seek out vegan groups and forums online?
I did initially to get grounded in the community and for people to digitally hold my hand. Now I’m more than happy to be involved but schedules a little too busy to actively seek it out.

Do you live in a meat/dairy eating household? And if so, how is that?
I do. I live in a shared building with 18 people; I reckon the veggie/vegan – omnivore split is about 50/50. It’s fine though. We have some really good discussions and slowly people are coming around!

Where do you like to eat out?
I love Black Cat Café, Yorica, Temple of Seitan  and my favourite of all is actually a Chinese vegan restaurant in Archway (Loving Hut).

Do you feel you have more in common with vegans than the majority of other people who don’t believe plant-based is the way forward?
I think there’s a mutual understanding that you potentially both have a love of animals and a desire to save the planet. That’s a good grounding for any friendship I think.

Do you, as most of us have to, eat out with non-vegans often and how do you feel about their eating choices?
A lot. I feel their choices are their choices. I don’t believe in preaching or being angry at people. We all have to come to these decisions in our own time and I’m a great believer in being a demonstrator of your values rather than just talking about them. 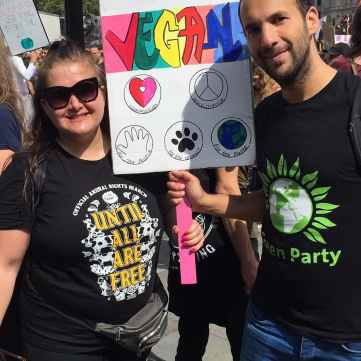 Are you involved in any form of activism?
Lots. Political obviously. Also regularly go to Critical Mass, which is all about cycling. I’m involved with XR, and was arrested this year during the Spring Rebellion. I’m currently awaiting my court date.

Even more crucially though, I’m a spokesperson for Make Votes Matter (the campaign for Proportional Representation). That might sound like a long stretch from veganism, but actually one of the biggest flaws in society right now is that our rules are made by the current unfair voting system. The Green Party would look to change that to have much healthier and well-balanced debates about everything in our democracy. Undoubtedly within that, animal rights and the environment would get a much better hearing.

How do you feel about the vegan jokes… you know, that vegans can’t go five minut­es without mentioning the fact or they explode?
Next…

Do you believe that the meat and dairy industries have a future?
If they do, ultimately our planet doesn’t. We need to move away to plant based options and make it all considerably easier, cheaper and more accessible – I’m open to whether that includes meat and dairy replacements.

How do you think we best ‘convert’ omnivores to a plant-based lifestyle? And do you actively try to do this?
I wouldn’t necessarily say convert. Educate, inform and persuade. And I do it by not actively doing it – by living a busy, happy, healthy lifestyle and demonstrating that being vegan is the future.

How do you feel about the horror-show videos of the reality of meat? Do you share them? Do you feel they have a positive place in changing people’s understanding of the meat and da­iry industry?
I don’t like them. I think they’ve got their place but I can’t face watching them and in fact I’ve never seen them. I think positive conversation is much more likely to create sustainable change rather than shock factors.

Are you positive about the future of veganism?
Absolutely. The one slight caveat is that I’m cautious about the vegan celebrities that are cropping up on YouTube… (usually white and male). We massively need to avoid having cult figures in the community, and also to acknowledge the work of a lot of women for the past few decades that wasn’t about getting popularity hits but about maintaining a principled and ethical argument for the environment – and for our animals.

What does being vegan mean to you?
Ultimately it can only mean love!